skip to main | skip to sidebar

The Milab DC-96C is our latest model in the DC series. It combines elements from the classic DC-96B with our most modern technology. The DC-96C was released last year at the Frankfurt Messe and is truly on a winning streak. It has just been nominated in the microphone category in the 2011 Resolution Awards and in the latest issue of Tape Op there is a great review. More reviews will follow shortly.
More about the 2011 Resolution Awards: http://www.milabmic.com/news.asp?show=one&id=95 and http://resolution.nodecube.net/vote/nominations.php
The DC-96C review in Tape Op: http://www.tapeop.com/reviews/833/
The Milab DC-96C product page: http://www.milabmic.com/showproduct.asp?id=1138
There is a chance to win a DC-96C in the Recordinghacks Microphone Giveaway contest in September. Check it out here: http://recordinghacks.com/contest/
For the latest Milab news I recommend that you "like" us on Facebook: www.facebook.com/milabmic
Upplagd av Mattias Strömberg kl. 13:42 Inga kommentarer:

Setting up for the LLB Expo in Stockholm 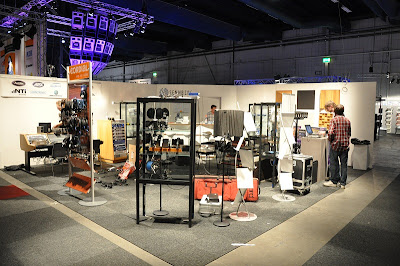 Sorry about the lack of posts lately. I focus mainly on the the Milab facebook page at the moment: www.facebook.com/milabmic

I am in Stockholm for the LLB Expo and today we have been setting the booth. It is a very nice booth and the location is excellent. I'm sure we will have a great show.

We are showing the new supercardioid capsule for the VM-44 for the first time at this show.
Upplagd av Mattias Strömberg kl. 20:45 Inga kommentarer:

I've spent a few days at the NAMM show in Anaheim and met many interesting people there, including guitarist Martin Taylor. I was invited to a guitar concert with some of the world's greatest players on the same stage: Don Alder, Muriel Anderson, Vicki Genfan and several more. And Martin Taylor of course, who used his Milab DC-96 as usual.

Today I drove up to Agoura Hills to visit Joe Vannelli, owner of Blue Moon Studios LA. Joe is probably most famous for producing and playing with his brother Gino, but he has also worked with many other artists over the years. He owns two Milab VIP-50:s and two DC-63:s that were all in mint condition. As I've said before, if you take well care of your mics they will last for decades.
Upplagd av Mattias Strömberg kl. 03:58 Inga kommentarer:

Press release is out: Custom Rycote mount for the SRND 360 Andy at Tape Op just informed me that there is an unedited version of the article on reviewer Mike Jasper's website.

The shootout involved some 90 mics and both Milabs (a VM-44 and a DC-96B) were selected as top choices. It was a blind test on acoustic guitar. The competition was very stiff and the way I interpret it, no other brand did as well as Milab.
Upplagd av Mattias Strömberg kl. 14:01 Inga kommentarer:

How to get a free Milab DC-96C

The contest for a free Milab DC-96C is up at MM:s website (in Swedish): 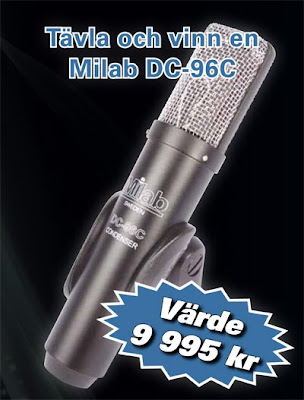 Mattias Strömberg, marketing manager for Milab Microphones, gives an inside look at the world of microphone making.

The content should not be viewed as an official voice for Milab Microphones.